Jordan has many romantic associations: Bible stories, lost cities, Lawrence of Arabia and Indiana Jones. It houses one of the most famous archeological treasures, the ancient caravan city of Petra,  which is half carved in  rock and a truly spectacular site. More than that, it's one of the most welcoming, hospitable countries in the world. Visitors are attracted to Jordan by its historical and cultural highlights. It is possible to visit the remains of cities, old before Christ was born, trek along ancient trails and roads mentioned in the Old Testament and through a landscape that has changed little in the last 2,000 years.

Further down the page: Read about our company * Travel facts Jordan. There is also a map of our country and our latest Jordan travel news.

This email address is being protected from spambots. You need JavaScript enabled to view it. 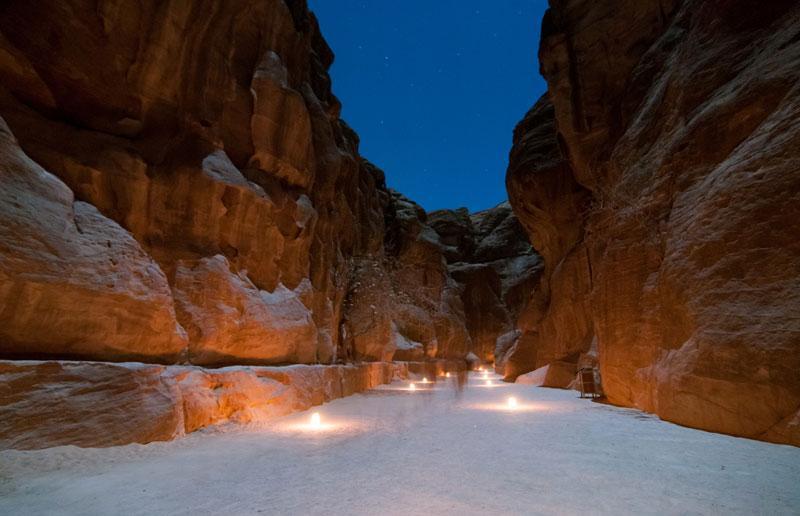 Amman
A sprawling city spread over 19 hills, or "jebels". Amman is the modern, as well as the ancient capital of the Hashemite Kingdom of Jordan. Often referred to as the white city due to its low size canvas of stone houses, Amman offers a variety of historical sites. Towering above Amman, the site of the earliest fortifications is now subject to numerous excavations which have revealed remains from the Neolithic period as well as from the Hellenestic and late Roman to Arab Islamic Ages.

Aqaba
The Gulf of Aqaba is famous for its marine wildlife. It is home to 110 species of soft corals and 120 species of hard corals. The reefs which fringe the Gulf, host over 1000 species of fish, corals, crustaceans, and mammals living in its waters. Nocturnal animals such as the crab, shrimp, and lobster appear in search of food in the dark hours of the night. Seasonal visitors to the Gulf of Aqaba include sea turtles, dolphins, sea cows, and harmless whale sharks.
Aqaba is the only coastal city in Jordan. This beautiful town, surrounded by fascinating colourful mountains and the blue waters of the Red Sea, expands over 27 kilometres of shoreline on the Gulf of Aqaba.

Dead Sea
At 410 meters below sea level, the Dead Sea is the lowest place on earth. Jordan's Dead Sea coast is one of the most spectacular natural and spiritual landscapes in the world and it remains as enticing to international visitors today as it was to kings, emperors, traders, and prophets in antiquity.
The main attraction of the Dead Sea is of course the soothing, abnormally salty water itself. The salt content of the water is 31.5% making the water so buoyant that it is impossible for the visitor to sink. The water also contains 21 minerals including high levels of magnesium, sodium, potassium, and bromine and 12 of these minerals are found in no other body of water in the world.

Desert Castles
Jordan's desert castles, beautiful examples of both early Islamic art and architecture, stand testament to a fascinating era in the country's rich history. Their fine mosaics, frescoes, stone and stucco carvings and illustrations, inspired by the best in Persian and Graeco - Roman traditions, tell countless stories of the life as it was during the eighth century. Called castles because of their imposing stature, the desert complexes actually served various purposes as caravan stations, agriculture and trade centres, resort pavilions and outposts that helped distant rulers forge ties with local bedouins. Several of these preserved compounds, all of which are clustered to the east and south of Amman, can be visited on one - or two - day loops from the city.
Qusair Amra, one of the best preserved monuments, is a UNESCO World Heritage Site. Its interior walls and ceilings are covered with lively frescoes, and two of the rooms are paved with colorful mosaics.
Qasr Mushatta, Qasr al - Kharrana, Qasr at -Tuba and Qasr al - Hallabat have been restored and are all in excellent condition. The black basalt fort at Azraq, in continuous use since Late Roman times, was the headquarters of Lawrence of Arabia during the Arab Revolt.

Jerash
The ruins at Jerash (known in Roman times as Gerasa) are one of Jordan's major attractions and still have the power to evoke the ghosts of Rome. It's one of the best examples in the Middle East of a Roman provincial city, and is remarkably well preserved.
In its heyday, Jerash (known in Roman times as Gerasa) had a population of 15,000 to 20,000 inhabitants and, although it wasn't on any major trade route, its citizens prospered from the good agricultural land that surrounded it. The ancient walled city that survives today was the administrative, commercial, civic and religious centre of Jerash. The bulk of the inhabitants lived on the eastern side of Wadi Jerash (now the modern town of Jerash) and the two centres were linked by causeways and processional paths. As you wander Jerash try to imagine life 2000 years ago: the centre bustling with shops and merchants, lined with cooling water fountains and dramatic painted façades. Picture today's empty niches filled with painted statues; buildings still clad in marble façades and decorated with carved peacocks and shell motifs; and churches topped with Tuscan-style terracotta tiled roofs. For a visual reconstruction of Jerash's finest buildings, check out the drawings at the visitor centre.

Madaba
This easy-going little town south of Amman is best known for its beautiful Byzantine-era mosaics, including the 'Madaba map', a 6th-century mosaic map of Palestine. Made of two million pieces, the Madaba map shows the Nile, the Dead Sea and Jerusalem, including the Church of the Holy Sepulchre.
You can see this mosaic, possibly Madaba's most interesting, in the Greek Orthodox St George's Church. Most of Madaba is now a carefully restored Archaeological Park, including the 7th-century churches of the Virgin and the Prophet Elias, and the older Hippolytus Hall.

Petra
Petra is the sort of place that usually exists only in the imagination. This unique ancient city was hewn from a towering rock wall; few of the imposing facades of its great buildings are freestanding. Make sure you take as much film as you can carry because every nook and cranny is a Kodak moment.
It's hard to overrate Petra. There's no other sight in Jordan, or perhaps the whole Middle East, as compelling - the locals know it, and they'll charge you accordingly. Once the capital of the Nabateaeans, a 3rd century BC Arab dynasty, Petra was forgotten for 1000 years and only rediscovered in 1812. It raised its public profile with an appearance in the movie Indiana Jones & the Last Crusade. Since its discovery and up until the 1980s, it was home to a number of Bedouin families who have since been relocated, an arrangement they are less than happy with. Don't expect a serene and contemplative visit: up to 3000 people come here every day.
You really need to spend a couple of days here to get the feel of the place, which means paying the entry fee more than once. Set in a deep canyon and only accessible through a narrow winding cleft (or siq) in the rock, Petra is carved from sandstone that takes on deep rusty hues interlaced with bands of grey and yellow. The most famous ruin is the Khazneh, or treasury, whose beautifully carved facade is the first thing you'll see when you enter from the siq. The monastery is equally imposing, and if you climb to the top you'll get stunning views. Other ruins include an 8000-seat amphitheatre and the Temple of the Winged Lions, still in the process of excavation.

Wadi Rum
The moonlike landscape of Wadi Rum is unique in the world. The desert of Rum is dotted with massive mountains, coloured in shades of red, yellow, and orange. Lawrence of Arabia spent some time here during the Arab Revolt, and many of the scenes from the film were shot here.
Although a popular tourist stop, it hasn't lost any of its forbidding majesty. The only residents of the area are 4000 villagers and Bedouin nomads, and the only buildings are goat hair tents, a few concrete shops and houses and the fort headquarters of the Desert Patrol Corps. There is no hotel.

Concert and dinner at Little Petra

In the early evening depart to little Petra for a seated dinner in front of a beautiful Nabatean Monument carved in the Sand stone mountains of Petra.
Upon arrival at the site we will park in front of a wall of carpets where a gate the middle of it will open in to a candle lit path that will lead you to the tables already set up in front of the Monument. As you enter the candlelit path, a flute player will play romantic music. Guests will sit down at the tables and dinner will be served by the Movenpick hotel.

During dinner a concert will take place in this stunning setting. 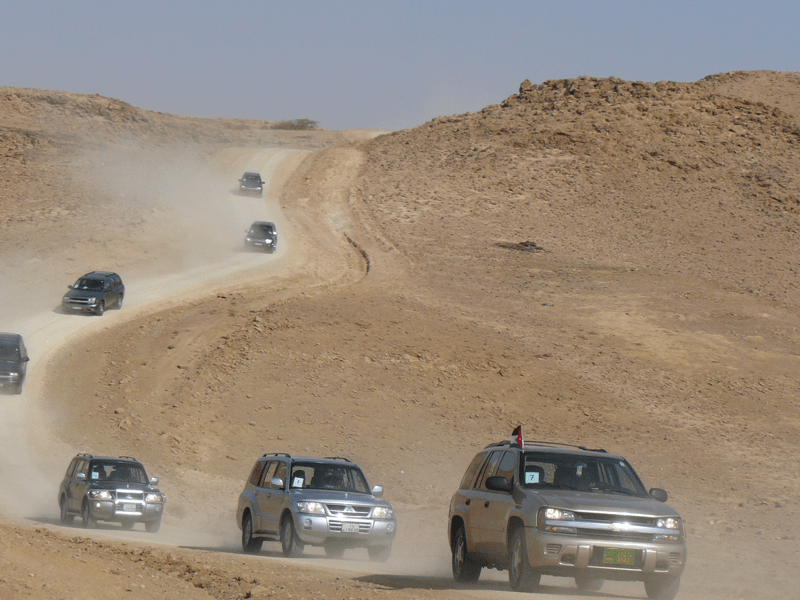 After Breakfast we will have 20 self drive 4x4s ready for you to drive down to Wadi rum for a full day Expedition inside Wadi Rum
A small briefing will follow and some tips on how to drive in the desert once we reach wadi Rum.
We now enter the desert of Wadi Rum at Kazalee gorge which is a crack between two mountains. At the Natural Rock bridge we will move on to a shaded location to have wonderful food catered.

Please contact us for more program ideas for Jordan at This email address is being protected from spambots. You need JavaScript enabled to view it.

Karma House - Karma House has a great reputation in the MICE (Meetings Incentives Conferences Events) and leisure market. We have a dedicated team eager to share their knowledge and experience with you. We want to make you and your clients stay truly memorable. Our creativity and skill in finding unique venues and with an extensive network of the best service providers we ensure professional handling of your visit no matter how simple or elaborate.